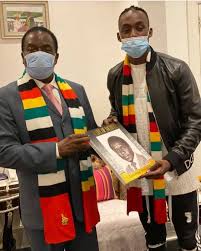 Warriors forward Tinotenda Kadewere was honoured by President Emmerson Mnangagwa as Zimbabwe’s tourism ambassador when the two met at State House in Harare on Wednesday evening. He wrote:

A Tourism Ambassador for Zimbabwe is someone who is chosen to become a public figure to help improve the tourism and market the culture of this country. Where is the debate again?

Mangwana’s remark came after some Zimbabweans on social media expressed disapproval over Kadewere’s visit to State House claiming that he had tarnished his reputation by meeting an alleged human rights violator.

Kadewere, who is back in the country following a largely successful debut season with French Ligue 1 log leaders Lyon said meeting the President was a dream come true.-pindula