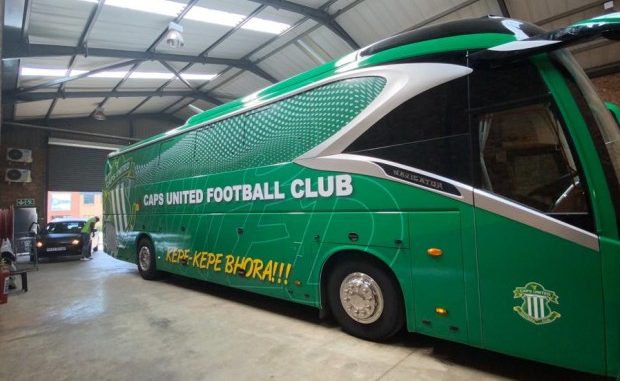 In a development that comes as a relief for Zimbabwe top-flight league football side, Caps United FC, the Zimbabwe Revenue Authority (ZIMRA) today released the 45-seater luxury coach which was impounded last year over unpaid tax allegations. The bus was donated to Caps United FC by Warriors footballer and Chinese based striker Nyasha Mushekwi as a thank you gesture to his former club.

According to the club’s official social media account on Twitter, the bus was released this afternoon (Thursday). However, conditions of its release were not disclosed.

This follows after ZIMRA officials requested that the $120 000-bus be taken into their custody pending a ‘review’ of the duty paid. An infuriated Mushekwi, who had personally delivered the bus to the club after paying off all the required duty was baffled by the move and lashed out at ZIMRA for its conduct. Speaking in an interview with the state media, Mushekwi said that:

I just heard they (Zimra) are taking the bus, it’s quite disappointing, I don’t understand the situation because they were the ones who told me to pay the duty which I paid for the bus to be cleared to come home.

Now, I’m hearing they are saying the duty I paid wasn’t enough for a bus like the one I brought in and, maybe, they want me to pay more, I don’t really know.

What I can say is that the news is very disappointing, especially after you have done everything to try and help sport in your country, and – for me – it’s like saying in Zimbabwe one can’t do something good and it gets celebrated because this is our country and we are the ones who can make a difference.

It makes you think twice, when such things happen, and you end up asking yourself if this was worth it, at all, or I could have taken whatever money I invested into the project and use it for my personal needs where I would not have to go through all these problems.

The beast is back

The much touted about 49 seater imported bus bought using Greenbacks is back in its rightful hands.