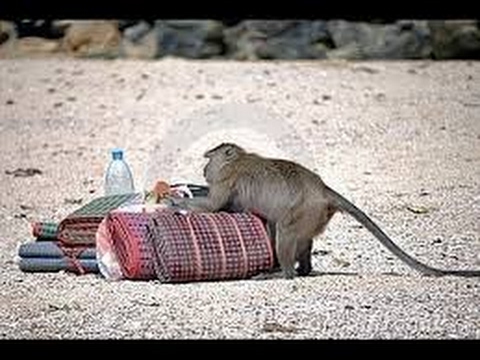 A monkey attacked a lab technician on the campus of a medical school in India and ran away with blood samples from three patients infected with COVID-19.

The robbed lab technician, meanwhile, took video with his phone of the incident. After snatching the samples and other medical items, the video reveals, the monkey clambered up a nearby tree; that video, which was shared on social media, also shows the animal gnawing on what look like surgical gloves, Indian news outlet NDTV reported.

The incident took place several days ago at the government-run Lala Lajpat Rai Memorial Medical College in Uttar Pradesh, a state in Northern India, and authorities made their first official statement on the theft today (May 29), according to NDTV.

Local residents are concerned that the incident could increase the risk of COVID-19 transmission — first to other monkeys and then to humans, India Today reported. To date, there are 7,170 confirmed cases of COVID-19 in Uttar Pradesh, according to ANI News.

Indeed, evidence suggests that humans can infect some animals with SARS-CoV-2, the novel coronavirus that causes the COVID-19 disease. In April, five tigers and three lions at the Bronx Zoo in New York City tested positive for the coronavirus; they were infected by an asymptomatic staff person, according to the Wildlife Conservation Society. Two pet cats and a pet dog in the U.S. have also tested positive for the coronavirus, which they likely contracted from contact with people, Time reported. And SARS-CoV-2 vaccine candidates have been tested on rhesus macaques, who show symptoms of the disease.

Recommended for you:- Dogs dig out missing Mkoba woman’s head

However, the monkey snatched blood samples, and not throat or tongue swabs from infected patients, college principal Dr. S.K. Garg said in a statement, according to The Indian Express.

“These were blood samples that are taken from COVID-19 patients during routine treatment,” Garg said. He added that there is no evidence that monkeys (or any animal) can catch the coronavirus through contact with blood from infected people, the New York Times reported. Instead, the coronavirus is primarily spread through contaminated respiratory droplets and possibly through aerosols containing viral particles, Live Science previously reported.

An inquiry about the monkey incident is currently underway; authorities with the medical college have asked the technician to explain in writing how he was overpowered by a monkey and why he responded to the theft by filming the thief rather than immediately notifying hospital officials, the Times of India reported.