UNITED Kingdom-based football intermediary and only African woman match agent in the world, Ellen Chiwenga, has set her eyes on the Zifa presidency in the 2022 elections. 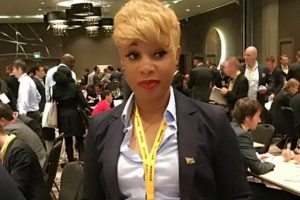 A member of the Association of Football Agents (AFA), the International Association of FIFA Licensed Football Match Agents (FIFMA), and Women in Football (WIF) from Zimbabwe, Chiwenga took to her Facebook timeline to announce her intended entry into mainstream football politics in two years’ time to challenge Felton Kamambo.

Should Kamambo choose to seek re-election as expected and wins, he will be in his second and final term according to Article 38 of the Zifa Constitution.

Chiwenga informed her friends on Facebook that she will contest the Zifa presidency when the present board’s four-year tenure expires in 2022.

Responding to a question by one of her Facebook followers, Kudakwashe Motsi, who asked if she was sincere in her intentions to run for the biggest football post on the domestic scene, Chiwenga said she was serious.

If she decides to run, Chiwenga has to relinquish her positions as a member of the Association of Football Agents (AFA) and the International Association of Fifa Licensed Football match Agents (FIFMA) as per Fifa requirements.

When Chronicle Sport contacted her yesterday, she could neither confirm nor deny that she was eyeing the Zifa presidency.

“My personal assistant will give you details, don’t worry,” Chiwenga said.

If she contests and wins, Chiwenga, who has been working in the world of football for more than 15 years, will become only the third African woman to lead a football association after Lydia Nsekera and Isha Johansen who were voted presidents of the Burundi and Sierra Leone Football Associations respectively.

According to her biography, Chiwenga legally represents athletes by checking their contracts and negotiating their employment. She is responsible for communication between managers and individuals she represents to ensure that both sides are satisfied.

She also arranges worldwide matches between teams belonging to different confederations, such as friendly matches and tournaments between national teams or clubs.

“With passion and relentless determination, Ellen works tirelessly to promote social and economic development through football. She transforms football into a powerful instrument of economic and human development that builds healthy communities, fosters growth, empowers women and inspires change around the world,” reads part of her biography.

In 2017, Chiwenga won the Personality of the Year Award under the Zimbabwe Achievers’ Awards and the African Woman of the Year in Football in 2018.

In the same year, she became an ambassador of FC Karachi in Pakistan. In August 2019, Chiwenga was appointed Global Goodwill Ambassador of Bring Hope Humanitarian Foundation (BHHF), a charity organisation that delivers humanitarian aid and medicines to internally displaced people, refugees and people in need around the world.

Chiwenga is also a member of the Right to Play’ Partnerships Committee.