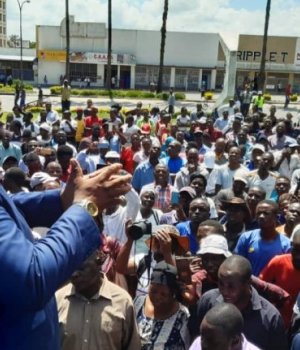 Job Sikhala says he is ready to lead Zimbabwe. Sikhala asserted that the people of Zimbabwe cannot afford the current regime anymore as it is causing them untold suffering. He said: I am going to call the people of Zimbabwe if I see that they are unnecessary dilatory tactics not to deal with this situation decisively within a short period.

Tough-talking MDC vice-chairperson Job Sikhala said he is ready to call the people of Zimbabwe to action if there is procrastination in dealing with the current crises head-on. Zimbabweans cannot afford a Zanu-PF government anymore, people are suffering, children are not able to go to school, and parents are struggling to feed their children.

There is no struggle anywhere else in the world where you fight against a dictator where there has been no bloodbath. The Zengeza West legislator rhetorically asked which is better to die demonstrating in the street and being killed while sitting at home.

Sikhala made the remarks during an exclusive interview to be aired on Alpha Media Holdings (AMH)’s Heart and Soul TV on Tuesday. The State media in the past has said Sikhala has told the Americans about the rift within the opposition and claimed Chamisa “was unsuitable to lead the party”.

Added the sources: “On his part, Sikhala highlighted developments in the MDC. “He accused MDC leader Nelson Chamisa of cowardice, adding that he was unsuitable to lead the party.

“He claimed that himself and deputy president Tendai Biti was better placed to lead the MDC, citing that they were brave and had been previously arrested.