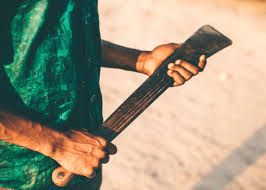 AN illegal gold panner hacked his colleague and left him for dead on Sunday at Manager’s Hill in Penhalonga following an altercation over how to share their spoils.

Duncan Mwaona (38) of Greenside, Mutare, sustained serious injuries all over his body and is battling for life at Victoria Chitepo (Mutare) Provincial Hospital.

It is understood that Mwaona and Mukoyi were working together as illegal gold panners.

Inspector Kakohwa said when Mwaona asked for his share of money, an altercation ensued.

“It is not yet clear how the money had been amassed. When they started fighting over the money, Mukoyi produced a machete and assaulted Mwaona several times all over his body. He left him unconscious and vanished from the scene.

“Mwaona’s friend, Jonathan, alerted his young brother Robson Tsupule, who then reported the matter to the police.

“Mwaona sustained a deep cut on the head, right hand, right leg and nose. He was rushed to Victoria Chitepo Provincial Hospital and his condition is serious.”

“We urge people to settle their differences amicably, instead of resorting to violence,” he said.

SAD: Man battling for life after being involved in a fight for thigh vendors…