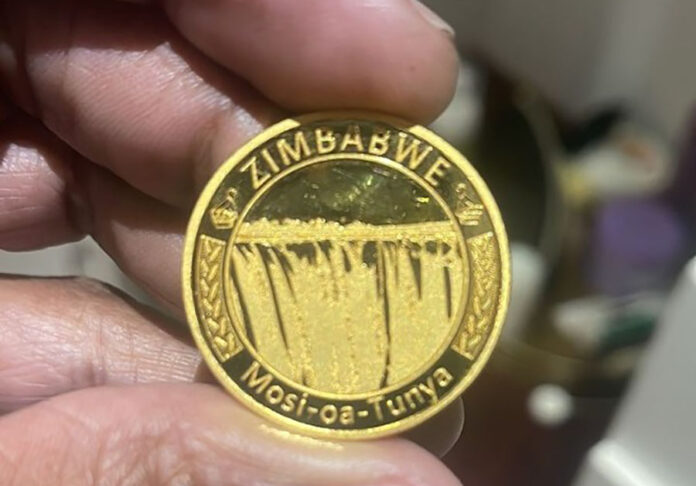 LOCAL pressure groups and analysts have expressed fears that the gold coins recently introduced by the Reserve Bank of Zimbabwe (RBZ) might be hijacked by the elite through a complex gold-looting web that has robbed the country of millions of dollars through illicit financial flows.

A 35-page report titled Zimbabwe’s Disappearing Gold: The Case of Mazowe and Penhalonga, released by the Centre of Natural Resources Governance (CNRG) says the artisanal mining sector has been captured by politically-connected individuals.

“Sakupwanya, according to one of his several runners in Penhalonga, is receiving several millions of dollars from rich people to buy gold for them. He, in turn, gives the money to his army of runners throughout the country,” the report read in part.

“In the case of Penhalonga, accessibility to the pits has turned political as powerful Zanu PF officials in Mutasa and Mutare districts are now partly responsible for granting access. Sakupwanya and Mnangagwa’s son are reportedly fighting for gold claims in Penhalonga area, which is very rich in gold.”

Sakupwanya is reported to have the backing of top Zanu PF politicians.

Penhalonga is a gold-mining community, north of Mutare, Manicaland.

The report exposes how the gold trade has been captured by the politically-connected individuals in Zanu PF, in what analysts say dents confidence on government’s plans to introduce gold coins to stem the economic haemorrhage.

The gold coins will cost US$1 801,70 per ounce and with the US dollar trading at $375 at the government auction system, buyers have to fork out about $676 000 to purchase one ounce or $1,6 million at the parallel market rate.

Indications are that ordinary people would not afford to purchase the gold coins, with a recent report from ISS African Futures estimating that about 4,4 million Zimbabweans are living on less than US$1,90 per day.

“There is overwhelming evidence that we are losing more gold to cartels … and it is much possible that there in nothing at Fidelity Printers, hence the issue of gold coins becomes an issue of managing the economy through propaganda, but otherwise it is not feasible,” Farai Maguwu, the CNRG director said.

“The Zimbabwe economy is run by cartels that are directly linked to the political leadership in Zanu PF, whether it is trading in foreign currency or minerals such as diamonds or gold and it benefits those that are in power. It means that the cartels are the ones that are going to decide the price of the gold coins,” Ncube said.

Economist Gift Mugano said: “The big elephant in the room is the disparity in the exchange rates. As long as there are massive disparities, it will create room for arbitrage and these gold coins will be a dismal failure like the auction system.”

Government officials have admitted that most of the country’s gold is smuggled out, with Finance minister Mthuli Ncube admitting that about 30 to 40 million tonnes of gold are being smuggled to South Africa.

Last week, Mutsvangwa failed to give satisfactory answers in the Senate on the gold coins, prompting Senate deputy president Mike Nyambuya to summon Mthuli to Parliament to give more details about the coins.

SAD: Teen girl fails to walk properly after being raped by 56-year-old man

“I am coughing”: Somizi tests for coronavirus.