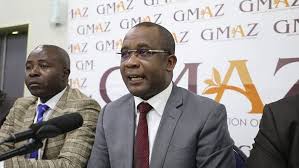 The Justice Mayor Wadyajena-led Parliamentary Portfolio Committee on Agriculture in parly yesterday quizzed GMAZ Chair Mr Tafadzwa Musarara and pointed out the different accounts over what happened to a $9 million loan which GMAZ is claiming it advanced to GMB to refurbish silos, GMB is denying they got the money from GMAZ but from members, Newsday reports.

Mr Musarara directed Wadyajena to a video the president is saying Musarara gave GMB the money to refurbish the silos and even produced an audit report to substantiate his claims and further produced a term sheet from GMB to the GMAZ financial advisers MetBank, who facilitated the loan facility.

However, GMB denied receiving funds to refurbish silos from GMAZ despite Musarara’s claims and evidence. GMB’s MD Clemence Guta maintained his position after Musarara produced the report and said:

According to the publication Wadyajena also dismissed Musarara’s paperwork:

Wadyajena insisted that the term sheet confirming the disbursement of the US$9 million should bear the term loan, not financing