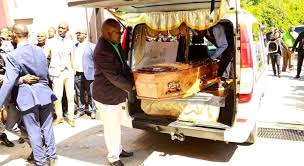 A BULAWAYO family suffered double trauma when Falakhe Funeral Services delayed delivering the body of their relative who died in South Africa by over 20 hours before eventually giving them a wrong body for burial.

The Ncube family had expected to bury Mthokozisi Ncube (37), who died of kidney failure on May 3, as soon as they received his body. The arrangement was in line with Covid-19 regulations that repatriated bodies should all be treated as if they are contaminated.

After failing to deliver the body, parlour officials suddenly became unreachable on their phones.

The family was frantic with worry and endured a sleepless night where they imagined all scenarios that could have caused the funeral parlour to disappear without notice. Yesterday morning the parlour called the family to collect the body and grief-stricken members said they suffered a “cruel blow” when they were shown the body of an “old man” who was a stranger to them.

The family paid Falakhe Funeral Parlour about R11 000 to bring the body into the country for burial.

Pouring out the family’s harrowing ordeal to Chronicle yesterday at Athlone Cemetery where Ncube was eventually buried after the mix-up was cleared, family spokesperson Mr Mfaniselwa Mpofu said the parlour had exposed them to unimaginable distress.

“We spent the whole of yesterday (Wednesday) waiting for my nephew’s body as we were told he would arrive by 11AM. We waited but his body didn’t arrive as expected and upon inquiring, officials at Falakhe told us there were delays at the border,” he said.

“They promised us that the body would be in Bulawayo by 3PM which also did not happen. We tried reaching the parlour after 3PM and they went silent on us, their phones were not going through. We spent a sleepless night without any communication,” said the disgruntled Mr Mpofu.

According to Mr Mpofu, the body arrived during the wee hours of yesterday morning and the family was only contacted around 8AM.

“We went to Falakhe and we were shown a coffin which was supposedly carrying Mthoko’s body. Our daughter-in-law back in South Africa had sent us pictures of the coffin and the one we were shown looked different. This prompted us to ask to at least see his face before proceeding to bury him,” he added.

Mr Mpofu said Falakhe officials were rude and refused to open the coffin claiming that it was sealed and could not be opened for any reason.

“We had accepted that due to Covid-19 we could not conduct a body viewing service but at least one of us had to ensure it was indeed Mthoko before we could bury him.

“After a struggle, they opened the coffin and we immediately thought something was amiss because the face of the body was covered with a piece of cloth.

When it was removed, we saw an old man that we had never seen before.” said Mr Mpofu.

He said emotions of family members that had been overstretched reached boiling point.

Mr Mpofu said there was an exchange of harsh words between the family and Falakhe officials who claimed there could have been a mix up as they had brought two corpses from South Africa at the same time.

They claimed the body the family had seen was in transit to Kezi in Matabeleland South.

“About three hours later, they told us they had Mthoko’s body. That is when we did paperwork and proceeded to Athlone where he is now being buried,” he said.

Mr Mpofu said the family was still traumatised and disappointed in Falakhe. “Falakhe is one of the oldest funeral parlours we have and we expected better from them. We hope that one day we will heal from the trauma they brought upon the family which was worsened by the fact that Mthoko’s wife and son could not attend his burial due to Covid-19 conditions.”

Contacted for comment, an official from Falakhe Funeral Parlour, Mr Eugene Ncube, said the company had acted on Government’s directive in refusing to let the family open the coffin.

He referred this reporter to the Ministry of Health and Child Care and refused to comment on what would have happened if the Ncube family had buried the wrong body. “We dealt with the person who paid for the policy and explained to them so I do not know where these allegations are coming from. This whole issue is because the permanent secretary in the Ministry of Health and Child Care wrote a letter banning us from conducting body viewing programmes or even opening coffins from outside the country,” said Mr Ncube.

“This policy is affecting us as a business as families are always questioning our stance. However, these allegations are false. We told the family there were delays at the border and they cannot accuse us of anything, we are simply following instructions laid out in the letter from the Ministry.”