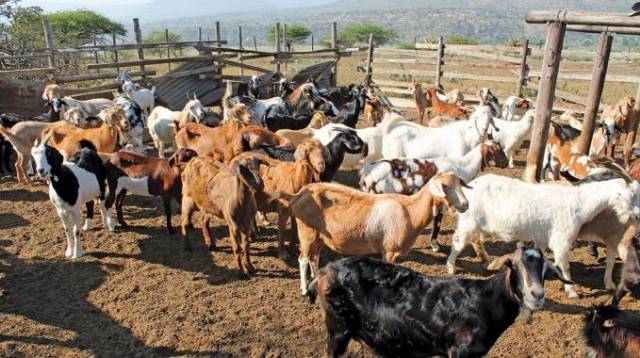 The gang struck at Sun-Yet-Sen village and whisked the livestock away in a commuter omnibus.

Police arrested the suspects on Sunday after they sold one of the goats to a Bulawayo resident who co-operated with police upon being questioned about the source of the animal.

Bulawayo Police Spokesperson Inspector Abednico Ncube yesterday said eight of the sheep have since been recovered while a hunt is on for the rest of the livestock.

“We arrested four people for stealing 30 goats and five sheep. They stole 16 goats from one person while 14 goats and five sheep were stolen from another. They took the goats and sheep in an unregistered kombi which was driven by the fourth accused, Mbuso Dube. The matter was reported at Sun-Yet-Sen police station,” said Inspector Ncube.

A Bulawayo resident bought one of the goats for R500 in Kelvin industrial area, at a place where goat herders usually sell their goats.

One of the complaints spotted the goat, approached the buyer and reported the matter to the police.

The first arrest was made when police accompanied Mr Mlalazi to the place where he bought the goat, which led to the next arrest in Iminyela suburb.

“Police officers went to Old Pumula where they arrested the first accused (Masambu), and three others. The trio led the police officers to Iminyela suburb when the fourth accused was arrested,” he said.

Police have appealed to the public to desist from buying stolen property as they risked being arrested.

“We sternly warn members of the public against buying any stock or any property from the streets or anywhere without witnesses for they also risk being arrested for breaching the law. It is actually an offence to be found in possession of stolen property and one may face imprisonment. The relationship that exists between police and our Bulawayo community is highly commendable, hence most cases are accounted for,” said Inspector Ncube.-Chronicle

“Indeed I am G 40”, Chamisa responds to Mwonzora’s claims: Watch