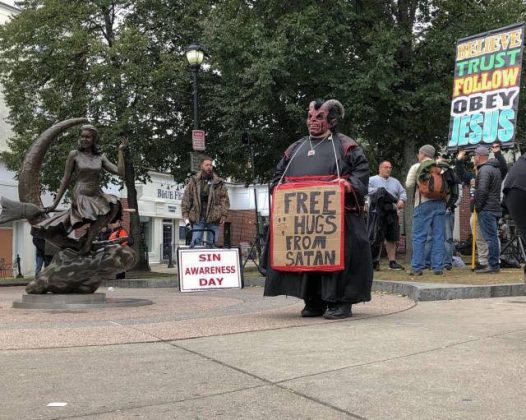 Satanic Church, the first of its kind in Africa, the church’s mission is allegedly to educate the public about the Satanic Religious Board.

The Church of Satan or the Satanic Church has been officially registered in South Africa after it was launched in the country in February this year. As the first of its kind in Africa, the church’s mission is allegedly to educate the public about the Satanic Religious Board. The Church also aims to address shared fallacies about the Satanic practices as well as ease what they said is a “Satanic panic” which is feared by the general public and commonly believed as voodoo.

Co-founded by Riaan Swiegelaar in South Africa, the Satanic Church, he said the registration has been a four-year process which has finally sailed through.

According to Swiegelaar the church has a council comprising of 7 people dedicated to representing Satanism in South Africa.

“When I discovered Satanism by myself, it was not really an organized organization. And there was no representation so I had to find my way, through the dark, so as to speak, till I met fellow Satanists and we became a very close-knit set of people. So, it is important to have a group that resonates with the philosophy and be able to meet.”

He said the main aim of Satanism was pure wisdom of oneself and living completely free from the guilty caused by other religions as a result of natural human instinct.

Swiegelaar said his family was okay with his decision to become a Satanist and to advance the interest o the Satanic Church in South Africa. He says the family holds no grudges as they have accepted his choices.

Many South Africans took to social media and expressed shock and fear over the Church saying it was a win for freedom of worship while others celebrated.

South Africa is a non-spiritual country that has guaranteed freedom of worship even though the concept is misunderstood by many people.

The country’s neighbour Zimbabwe has a detailed clause in its Constitution which makes it illegal to worship the devil. Satanic Churches are not allowed in Zimbabwe.

Long ago Zimbabwe even had laws, the Witchcraft Suppression Act that made witchcraft illegal.

The law made it legal to engage in practices commonly associated with witchcraft and also made it illegal to call anyone a witch.

Though the witchcraft law eas abolished, the satanism law has remained, without much resistance.

It is not clear if the Church of Satan in South Africa will look to grow its members, and expand into other countries.

Radio 702 had a podcast with Riaan Swiegelaar who spoke out all regarding this,