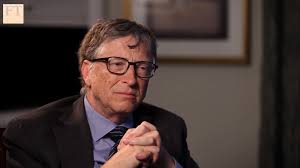 Billionaire founder of Microsoft, Bill Gates (64) has been arrested by the FBI today on charges of biological terrorism after it was revealed he created the coronavirus so that he could control us because he’s always had an interest in that kind of thing.

Over 1000 FBI police officers surrounded his high-security underground Seattle science bunker earlier today, where they told him to come out with his hands up, and to bring the cure of COVID-19 with him, he if could.

The arrest of Bill Gates is reportedly the result of a tip-off from the Melbourne conspiracy theorists who breached Victorian lockdown restrictions yesterday to spread ‘the truth’ about this so-called pandemic.

According to the 100 or so freedom fighters who gathered at the steps of Victorian state parliament yesterday, the truth is actually a lot different from what Australia’s 32,000+ medical practitioners are suggesting, which is that COVID-19 is a highly-contagious respiratory illness that appears to have crossed over from wildlife to humans in the Wuhan region of China late last year.

Instead, those that can ‘see through the media’ say that it is actually a combination of villainous pharmaceutical companies working with both the Orwellian scientists behind 5G cellular technology network and tech billionaire Bill Gates to control our minds and ruin our economy.

Ten people have been arrested for breaching government social distancing measures and physically clashing with the police at the rally.

It is not yet known how Bill Gates has become public enemy number one for our nation’s coronavirus conspiracists, especially after his recent donation of $10 million to Australian disease researchers working to prevent severe cases of COVID-19 in at-risk groups such as healthcare workers and the elderly.

Regardless, it seems that their brave efforts to spread the truth have paid off overnight, with the FBI finally arresting Bill Gates on charges of biological terrorism and the recently invented crime of coronavirusmaking.

Speaking to the Betoota Advocate today, leading Victorian anti-5G-anti-vaccine-anti-lockdown protestor, Keith (49), says while he appreciates seeing Bill Gates arrested – this is just the tip of the iceberg.

“You can’t arrest Bill Gates while David Koch and Karl Stefanovic get to walk free” said the prominent YouTube user and retired roofer who has been on compo for two decades.

“We need the FBI to arrest the hosts of both the Today Show and Sunrise for lying to us.”

“As well as the blokes who keep building these phone towers. Telstra, Vodafone, Optus. Them too. They are all complicit”

“ScoMo should also be brought to justice for peddling the advice of these so-called medical experts. This is just the beginning. The truth is out there”