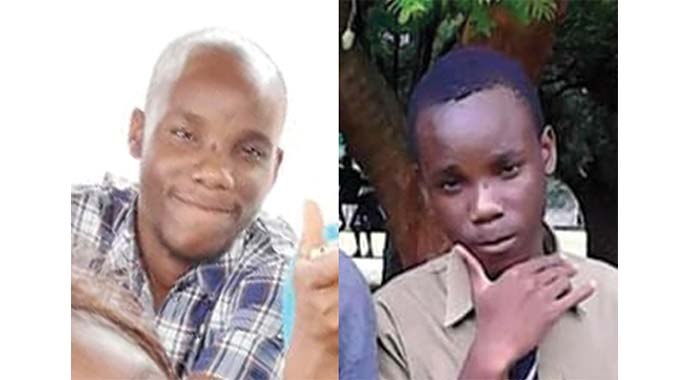 THE father of a 20-year-old man who allegedly killed a 25-year-old woman in Bulawayo, dismembered the body and put the remains in a drum filled with acid, yesterday opened up about the grisly ritual murder.

Tawana Ngwenya was arrested in Harare on Thursday as a suspect in the brutal killing of Ms Thabelo Mazolo.

Her body was cut in half and the lower part has not been located.

The breasts and palms had been sliced off.

The rest of the body was stashed in a drum in a toilet at a guest house where she worked and lived with Tawana and his father Mr Buzwani Ngwenya (60) who was the caretaker.

The community around Fortunes Gate in Matsheumhlophe where the murder occurred continues to express disbelief and horror at the callous killing.

Tawana allegedly acted on the instructions of a South Africa-based sangoma to kill Mazolo, so he could get rich.

Colleagues alleged they saw a message on his phone instructing him how to sell his soul for riches in a blood ritual that involved killing and mutilating Mazolo.

It is suspected Mazolo could have been killed between 29 May and 1 June when she went missing.

On 1 June Mr Ngwenya received a message from Mazolo’s phone informing him she would be away for a week.

Tawana fled to Harare on Tuesday when his father continued asking him about Mazolo’s whereabouts.

Mazolo’s uncle Mr Benny Moyo yesterday said she would be buried at her rural home in Zhombe tomorrow.

“The family will discuss the way forward in Zhombe,” said Mr Moyo.

Tawana is expected in the city today to assist police with investigations.

The elderly Mr Ngwenya yesterday said the day he heard his son could have committed the heinous act destroyed him.

“He was a quiet young man and seemed to be in good books with Thabelo. She would call him for assistance whenever she was in town on business. They appeared to get along very well. I’m crushed to learn he could have killed her in this beastly manner,” said Mr Ngwenya.

He said he has been seated at a shopping centre in the city the whole day as he could not process what his son had done.

“I am afraid to even approach Thabelo’s family but we obviously have to meet over this at some time. I need some respectable people to accompany me to talk to them. These people have been very good to us.

“I do not know what evil spirit possessed him to do this,” said Mr Ngwenya.

“Imagine we were looking for her and he was assisting us yet he could have known she was already dead. I feel like I’m losing my mind.”

He said his son had few friends and he could not imagine which one of them had initiated him into satanic rituals to kill people.

They said there was nothing in his behaviour that showed he was capable of hurting another person.

“He was a smart formal dresser. He never wore casual stuff like jeans. He worked at a company that sells chemicals and was known for selling detergents in the area. He looked like a focused young man. I cannot believe he committed this cold-blooded killing. I guess the quiet ones always shock us,” said a neighbour on condition of anonymity.

“The suspect will be here tomorrow to assist with further investigations,” he said.

Tawana did his O-levels at Allan Wilson High School in Harare.

He was said to be an average student who stayed out of trouble.