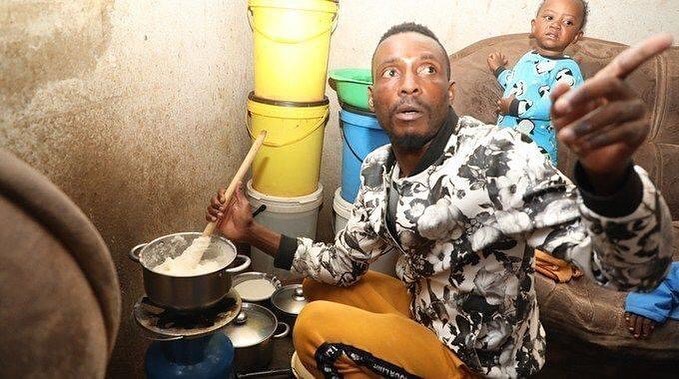 Lockdown Diaries: Ex-Macheso dancer Franco Slomo deserted by wife over poverty. Besides the blood bond, there is something stronger than keeps Francis “Franco Slomo” Dhaka closer to this little creature in his arms. This is a son he gave his name with obvious honour to the mother and recognition of the precious offspring of his loins.

His two-year-old baby cries in his arms, clinging to his shoulders in an apparent call for comfort and attention. The son is named Francis (Junior). He was a bundle of joy when he entered the world and Franco Slomo celebrated with his wife Lonah Guvheya. Sadly, that is no longer the case. Franco Junior is now a source of sorrow and pain whenever he screams for his mother. His mother is nowhere near.

She left Franco Slomo three weeks ago to stay with her sister. Things have fallen apart. If you have remembered this name from the showbiz scene, you are right on point. Yes, this is Franco Slomo who made a name as Alick Macheso’s main dancer.

Most people relate to Franco from this popular video when Macheso and Tongai Moyo were rivals. Moyo was to later join Macheso on stage that night. But that is a story for another day. Franco Slomo is currently in a sad scenario.

We arrived at his house in Chitungwiza around 7pm on Thursday evening and Franco Junior was crying for his last supper. If everything was in place, this toddler could have had his meal and, probably, gone to bed.

But that was not it. His father was still preparing the meal. He was still to prepare the bed. His wife dumped him last month and he is single-handedly looking after their two children at a rented house in Chitungwiza.

Life has not been rosy for the talented dancer and his world seems to be crumbling as responsibilities mount on his shoulders in an era where he does not have a regular source of income. His wife of seven years left because the going was getting tough at home. The once-popular dancer is now a pale shadow of himself.

Although Franco managed to get attention in the early days of his departure from Macheso’s group with the likes of Obert Gomba, Noel Nyazanda and Jonasi Kasamba when they formed Extra Kwazvose, his journey has now turned thorny.

The Extra Kwazvose ship was not stable for long and the other three members jumped out, with Kasamba and Nyazanda rejoining Macheso. Gomba briefly rejoined Macheso before relocating to South Africa.

Franco remained steadfast with the group. He has seen the twists and turns of the solo journey but admits he is now on the roughest patch of his career and personal life.

A few big shows and tours to remote parts of the country that sustained Franco have dried up. Even if he were to get any corporate function deals or Covid-19 awareness campaigns at the moment, his situation right now seems unbearable.

He has to cook and wash for his children. They need motherly and fatherly care from him right now. “Things have not been well for me over the past year. My wife left me when it got worse and I am not sure why she made that decision. Everyone is struggling at the moment in showbiz,” said Franco.

“My heart bleeds for my son Franco Junior because he wants a mother’s love. He cannot get that love at the moment and everyone in my family is worried about this situation.

“My mother in Kaitano, Mt Darwin told me to take the children to her, but I cannot travel because of the current situation. My cousin in Bindura also said she wants to assist me, but I do not have money for her bus fare.”

It seems things are really bad for Franco. There was no light in his room because the bulb no longer works and he does not have money to replace it.

Franco Junior cried more as his father spoke. During the conversation, Franco Slomo would attend to his pot as he prepared sadza for the young child. He says it has been a tough journey because the image people see when he goes on television or on stage is different from the life he leads.

“Most people think we make a lot of money, but that is not the situation at all. We made some money as we travelled with Macheso’ but we did not earn something that justified our popularity.

“We formed Orchestra Kwazvose to explore a new path, but it has not been rosy on the way. Other members returned to Macheso’s group and I tried my best to maintain the new group. “I used to get good income for my family even when things were hard. I also had to work extra hard.

“But all has changed now. The current lockdown has changed our situation and this led to a clash with my wife.” Contacted for comment, the wife did not want to disclose more about the affair. She said it is a private issue and she hopes to be with her children again.

Franco said the wife had contacted him to check about the children, but she had indicated that the current lockdown is making it difficult for her to travel. “She just said she is coming to see or take the children. It is a tough situation at the moment and I am hopeful it will be well.

“I am planning to take the children to my mother. She wants her grandchildren to be with her. “I cannot continue with this situation. I will try my best to make them happy even if their mother does not attend to their plight.”

The dancer has other children from previous marriages to look after. His love life is like a folktale. His first wife died and he married two other women that deserted him in different circumstances. He has two older children from the previous unions and the burden seems heavy for him.

Franco’s case is challenging, but he acknowledges many other artistes are going through similar hardships. Barring differences with his wife, Franco believes he will be able to resuscitate his career and take care of his family when the lockdown ends and allows him to have live shows.