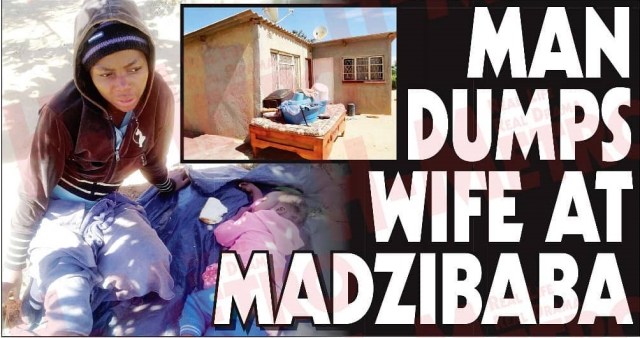 Drama as man dumps wife at Madzibaba’s house. Tererai Mazani took advantage of the National Lockdown Level 2 to move from a mine outside Harare during the night and arrived home and greeted his wife Rachel Guvheya, 20, by going through her WhatsApp messages.

An artisanal gold-panner on Thursday packed his wife’s belongings and dumped her along with their baby at a Madzibaba’s house after discovering their illicit affair in Ngungunyana, Budiriro.

Tererai discovered through Rachel’s WhatsApp conversation with Madzibaba Evans Ndhlovu, 43, that the two had several s.e.x escapades. Madzibaba Evans’ wife was reported to have been rushed to a local clinic after her blood pressure shot upon learning of her husband’s shenanigans.

Rachel admitted bedding married Madzibaba Evans and Tererai packed her belongings and informed his close relatives who helped him to take her to Madzibaba Evans.

“My husband went through my mobile phone upon his arrival from a mine and discovered that I was having an affair with Madzibaba Evans and assaulted me,” said Rachel. “He informed his relatives and they packed my belongings including our matrimonial bed saying it was defiled by Madzibaba that he could no longer sleep on it.

“I am prepared to live with Madzibaba Evans as his second wife since he has wrecked my marriage ndichatongonomanikidzira mumba mavo imomo. “His wife and children turned against her as well as residents but I have no other plans other than staying here until they accept the situation on the ground.

“I phoned Madzibaba Evans and he advised me to leave his house promising to look for alternative accommodation but I am not leaving this place until he returns from hiding,” said Rachel. Tererai confirmed the story saying he was still in shock to respond.

“I have nothing to say at the moment because the issue is too emotional if you may excuse me for now,” said Tererai refusing to answer on measures he was to take about the child who was accompanying her alleged adulterous mother.

Efforts to get Madzibaba Evans’ comment were fruitless by the time of going to print as his mobile phone went unanswered. However, Madzibaba Evans’ two children vowed not to accommodate Rachel accusing her of adultery.

A 22-year-old Madzibaba’s firstborn told H-Metro that they have no more rooms to accommodate Rachel and her child. “That adulterous woman caused my mother’s sickness so I will not allow her to take her belongings in this house and daddy vangobuda and is no longer answering his phone,” she said.