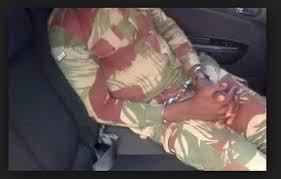 A SOLDIER based in Hwange went berserk and randomly assaulted patrons at two nightclubs after his love proposals were turned down by female revellers.

As if that was not enough, Philani Nyoni (34) of 356 Empumalanga in Hwange who is employed by the Zimbabwe National Army also attacked and overpowered four policemen who were trying to arrest him. He was only subdued when reinforcements arrived.

Trouble started when Nyoni went haywire when his love advances were spurned by two female patrons he was stalking before he turned on them and three other patrons for daring to deny his proposals. Before going on the rampage, he stole as punishment a cellphone from one of the revellers whose girlfriend had turned him down.

Nyoni appeared before Hwange provincial magistrate, Mrs Ailenne Munamati facing a count of theft, three counts of assault, a count of malicious damage to property, escaping from lawful custody and resisting arrest or assaulting a peace officer. He denied all charges claiming that he was the victim of assault after patrons had ganged up on him for an unknown reason.

Mrs Munamati, however, convicted him on the assault, malicious damage to property and escape from lawful custody charges while she acquitted him on that of theft and resisting arrest.

The assault, malicious damage to property and escape from lawful custody counts were treated as one for the purposes of sentence resulting in a 24-month jail term of which eight months were conditionally suspended. On the charge of escaping from lawful custody he was sentenced to three months imprisonment which was wholly suspended for five years on condition he does not commit a similar offence.

It is the State’s case that on 8 December 2019 at about 3am and near Thulani Night Club, Nyoni approached Mr Munyaradzi Moyo’s girlfriend, Ms Sitali Nasile and proposed love to her but she turned him down. He continued to accost Ms Nasile and at one point tried to drag her into the dark resulting in Mr Moyo intervening before telling Nyoni to stop harassing her.

Nyoni then snatched Mr Moyo’s cellphone which he was holding in his hand and fled. A report was made to the police and investigations were carried out leading to his arrest. The value of the phone was $250 and it was not recovered.

On the same day at around 5am, Nyoni approached Ms Marvelous Neshavi who was dancing to music inside Cricket Club with her female friends. He asked her to befriend him but she refused. However, Nyoni continued to stalk her resulting in another patron, Mr Janah Zacharia Murasiki intervening. Neshavi went outside the club and Nyoni told Mr Murasiki not to worry as she was a prostitute. He went on to strike Mr Neshavi with sharp pieces of an empty beer bottle on the left shoulder once.

He was stopped by Mr James Muyambiri from further assaulting Neshavi. She managed to run away but she sustained a dislocation on the left ankle after she fell down during her escape. She also sustained bruises on the left shoulder.

Afterwards Nyoni approached Mr Murasiki and hit him once with a broken piece of bottle on the right side of the chest and shoulder. After attacking Mr Murasiki he approached the club owner, Mr Fanuel Mutasa who was seated in his car and started to converse with him. Mr Mutasa pleaded with Nyoni to stop assaulting and destroying property at his premise. This was after a row Nyoni had with another patron, Mr Tichaona Muyambiri before picking up a chair and hitting him with it resulting in it being damaged.

He went on to remove the leg of the club’s table and used it to hit an unknown reveller resulting in it getting broken. The value of damaged property is $1 500. However, this only served to agitate Nyoni as he reacted by striking Mr Mutasa with a sharp object once on the chest.

Fearing for his life, Mr Mutasa ran away with Nyoni in hot pursuit before he managed to outpace him after the aggressor ran into a fence wire with his chest and fell to the ground. Mr Mutasa sustained laceration on the chest.

At around 7am Nyoni was arrested and taken to Hwange ZRP where he was charged with disorderly conduct and assault cases with regards to the Cricket Club incidents.

Nyoni was ordered by the police officers to sit down while they processed initial documentation and he complied. However, he suddenly stood up and ran out of the charge office towards the exit gate before police officers managed to catch up with him after he had lost his balance and fell on the ground on his face. While he was being informed of his arrest for escaping from lawful custody, Nyoni refused to be arrested and kicked away four police officers. Reinforcements were called in to subdue Nyoni who was subsequently re-arrested.