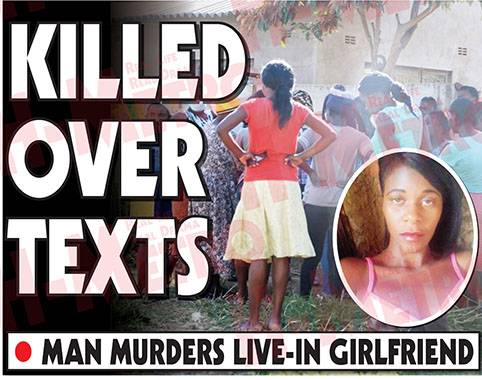 Chaos as boyfriend kills girlfriend over text messages and disappears. The now-deceased Chipo Vhunga reportedly got into a heated argument with her lover Munyaradzi over chats with her other boyfriend based in the United Kingdom. Munyaradzi is reported to have gone through Vhunga’s messages during his night shift at work on Monday. He then confronted his girlfriend when he got back from work on Tuesday morning.

’Lockdown’ lover on the run. Crowborough community was on Tuesday left horrified after a young woman was murdered by her boyfriend who she was cohabiting with since the beginning of the lockdown.

During the confrontation, which led to a fight, Vhunga died although her body had no signs of injuries or bleeding. A few hours before her death, Vhunga had shared lighter moments with her neighbour only identified as Mai Manyani.

“She came to my house and we shared jokes before I left to pray at the field and when I returned, she beeped me on my phone and I didn’t return the call only to be informed that my child Chipo was being beaten by her boyfriend, I didn’t take it seriously and only went thereafter I heard that she was dead.

t’s so sad and unbearable to be killed by a person she was looking after as he had moved in with her before they were married,” she said. The former couple’s other neighbour Melissa said when Vhunga died, there was no sign of injury or blood at all that they all thought she was just unconscious.

“After killing her, he left for the first time then returned to check if she had regained consciousness because he wasn’t sure whether she had died or not, when he returned, he was in the company of his friend and together, they rubbed ‘bute’ on her forehead in a bid to resuscitate her but it was all in vain because she had already died,” she said. Vhunga’s landlord who refused to be named said she was shocked by the incident as she had always known the young lady to be single and was surprised to hear that she had been killed by her ‘husband’.

She added that this wasn’t the first time that the two had fought, they were in the habit of fighting regularly and it’s a pity that it all ended in death. It is reported that after the murder, Munyaradzi texted his co-tenants to go and check on their friend Chipo only to find her dead. The murder scene attracted crowds of people who wanted to find out what had really transpired. There was no observance of social distance as everyone wanted to hear or share the news of what had transpired. Munyaradzi is currently on the run.