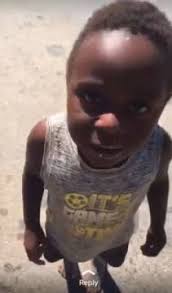 Harare-based soccer giants, Caps United, have joined other corporates who are donating to a young boy whose video went viral this week.

The youngster, who has been identified as Zoolian Karendo of Chikonohono in Chinhoyi, was captured in the video clip complaining to his father for over-relying on sweet potatoes (mbambaira) and asked him to buy bread instead.

The boy, aged around 3-4 years, is heard in the video filmed by his father’s friend while his dad prompted him, saying “Haa Baba imimi mukundikuvadza nembambaira… tengai chingwa!” (Dad, I’ve had enough of these sweet potatoes, buy some bread!)

Makepekepe has now pledged VIP tickets for its five home games to Zoolian and his father. The club said in a tweet:

Shena iyo and the body language we are tempted to believe the guy was coming from some Chikweshe treat. We are giving 5 home games VIP tickets to the young fella and his guardian.

We challenge FC Triangle to come up with some sugar and Chicken Inn FC a 2 piecer plus [a Castle Lager].