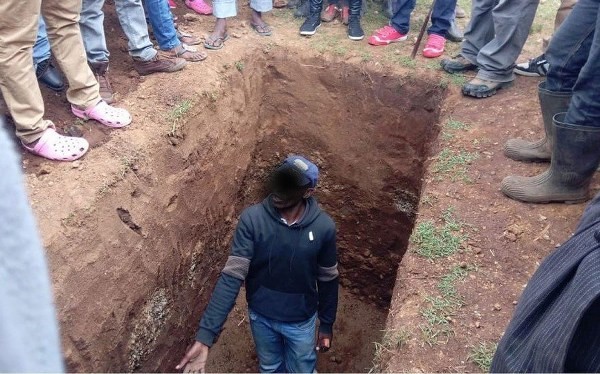 Bizarre as body vanishes from the grave. Villagers in Gokwe South were left shocked after they found the grave of villager Gideon Fitshane who was buried on Monday empty and shockingly without traces of footprints of people who could have tampered with it.

Narrating the strange incident that has become the talk of Zwelempini Village under Chief Mkoka, Judith Fitshane said she got the shock of her life when two male adults came to her homestead to inform her that the grave where her husband was buried had been tampered with.

“My husband was found hanging from a tree after he was accused of committing rape. We buried him yesterday (Monday) but we were shocked when we went to check the grave to find it open with a deep hole. Upon further checking the elders that included village head Justice Ncube discovered that the body of my husband was not there,” she said.

She continued: “This has left us shell-shocked because this is strange and it has never happened in our family and there were no footprints of people who could have taken his body. I cannot say much because this issue is now being handled by the late’s brothers and community leadership.”

Village head Justice Ncube confirmed the incident: “We are shocked and at a loss for words as a community because we have never seen such an incident in our community. As per our tradition we went to check the grave of our late fellow villager but we were shocked after we saw that his grave was tampered with. Upon further checking we discovered that his body was not there; the coffin was empty.”

He added: “He committed suicide after a relative had made a report to my court that he (the deceased) raped his niece and I instructed his family to make a report to the police since the matter was of a criminal nature. He (the late) then came to me to ask when his case would be heard at my court and I told him the matter had been referred to the police. I think he feared to be arrested as a result he decided to commit suicide.”

Ncube suspects two scenarios could be at play — witchcraft or he could have mysteriously left the grave — since he died an angry man.

“There are about two scenarios here — there is a possibility that some witches could have come during the dead of the night and taken his body. The other probability is that since he died an angry man he could have risen and disappeared — such strange things happen especially if a person died a bitter person,” he said.

Ncube said he and the deceased worshipped at Glory of God International Ministries led by Bishop Estias Takawira who at one of the services prophesied about his death and warned him to engage in prayer and fasting.

“He was warned to engage in serious prayer and fasting so as to withstand that spirit. Unfortunately, he had backslidden,” said Ncube. Bishop Takawira confirmed the prophecy.

“It was during a prayer session when I was praying for my congregants, I saw him dying in a painful manner that left many shocked. I told him that for him to negate that spirit, he needed to engage in serious prayer and fasting. Unfortunately, he backslid,” said Takawira.