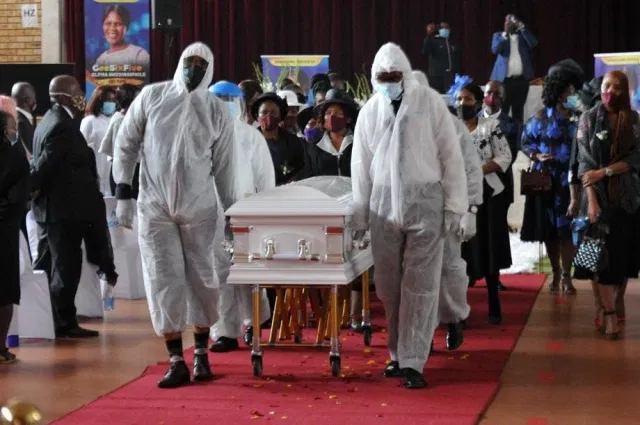 Gee Six Five may have touched many people with her hit song Obani Labantu, but her three kids were not comfortable with her singing career.

Speaking yesterday during their mum’s funeral service at Majuba TVET College in Newcastle, northern KZN, they said they finally gave her a chance as they recognized she was happy with it.

The gogo, whose real name was Olpha Selepe, died on Wednesday, 9 December after testing positive for Covid-19.

Her son Nhlakanipho, who spent his last moments with her at his home in Durban, said: “I never commented about her singing project and she thought I was supporting her.

“The reality is that I wasn’t comfortable with it but reserved my comments because I noticed she was happy with it.

“My mother was a happy person after releasing her song, Obani Labantu.

“One day I woke up at midnight and noticed her bedroom lights were on. I asked her why she wasn’t sleeping and she said, ‘I’m happy my son’.”

Her younger son, Fika, said they were hurt when their mother recorded the song behind their back as they didn’t want her to do it

“We decided to give her a chance because she had a big message for Mzansi,” he said.

Daughter Nontobeko Nkosi said: “She’d tell us how to conduct her funeral service. She told us she didn’t want speakers who’d talk for a long time. She wanted a short service.”

“Our community was touched by her undying spirit.”