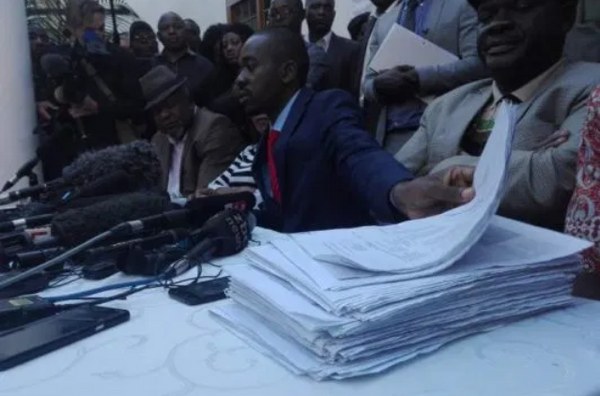 Chamisa said the political glitches that arose during the disputed 2018 polls required a comprehensive national dialogue.

Speaking at the Bulawayo Press Club last week, the opposition leader said since 2000, the country has failed to resolve political problems that came with disputed elections.

“Right now, we are talking about 2023 elections. There can never be an election without resolving the 2018 political issues.

Chamisa said not resolving political issues was like attesting to ZANU-PF political commissar Victor Matemadanda’s theory that elections in Zimbabwe were just a ritual.

“What is very clear is what (ZANU-PF political commissar Victor) Matemadanda has said elections are insignificant in this country and that they do not matter. They are just a ritual,” he said.

“We cannot continue to have a cycle of disputed elections. Those who are putting their hopes on 2023 elections might as well forget it if we have not resolved the issue of elections in Zimbabwe.

“Why should we go to rituals that are not giving effect to our voices? That is why we must resolve the governance crisis,” Chamisa added.

Chamisa commented on the planned delimitation of constituencies and said, the Zimbabwe Electoral Commission (ZEC)’s composition was disputed, hence could not carryout a credible election.

“ZEC is in the process of de-linking delimitation of boundaries from the national census on the basis that the exercise involves the number of registered voters and does not rely on the country’s census that captures data of the population.

“ZEC cannot have a credible process of delimitation when they are contested themselves. It is an issue we are putting as one of the key reforms needed.

“Mnangagwa and his government want to separate a census from delimitation because they do not want people to compare the statistics through an objective scientific census against the figures that then come out of their new boundaries,” Chamisa said.

The delimitation exercise is usually conducted after the national population census. The country is due for a census in 2022, with elections the following year. President Emmerson Mnangagwa and Chamisa have been haggling on the modalities of the dialogue.

Mnangagwa wants the talks to be conducted under the Political Actors Dialogue (POLAD). Chamisa however argues that the bulk of the parties that constitute POLAD have no political relevance as they have no any representatives in Parliament.

“I”m brokenhearted She lied to me that she is single”