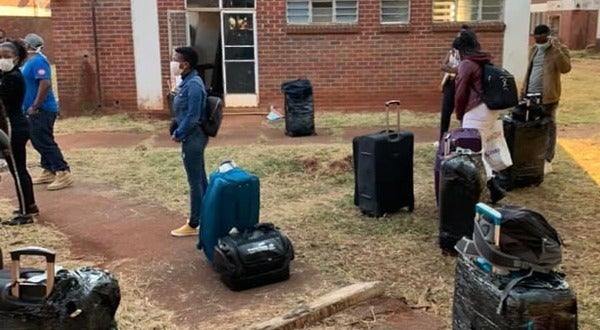 AT LEAST 50 inmates due for release at the Beitbridge quarantine centre might leave without knowing their COVID-19 status because of delays in releasing results by the government.

Most, including eight recently recruited government environmental health technicians destined for Matabeleland North, some civil servants, eight truckers and other ordinary citizens, have already overstayed by seven days at the facility.

Health ministry spokesperson Donald Mujiri did not respond to questions while the director of epidemiology in the ministry Portia Manangazira said the questions sen to her were a “tirade that could not be directed to her.”

“I do not think so (that they are questions) it is just a tirade and I am not sure it is correct to direct that to me,” she said.

“There is a backlog at Mpilo which I understand has been addressed, so they are working to clear it,” Chikodzore said.

“It is not true. Maybe it is the laboratory department which is run from Harare,” he said.

The returnees said they were now awaiting the second tests before they could be released, adding that results had taken more than a week to come.

“I work in South Africa doing essential services and I have all my documents in order. I was coming to pick another truck after my off duty. There were about 20 of us who arrived at Beitbridge on April 26. We were tested for the first time and the second tests were taken on Monday last week,” an inmate, who refused to be named, said

“It is now over a week and we are still waiting for our results for which authorities are putting the blame on broken-down equipment at Mpilo.”

He said the results only took two days and their attempts to raise concern were met with threats of violence from security personnel.

Health workers at the centre are clearly overworked and last week ran out of rapid test kits, delaying processing of travellers and inmates only got masks this week.

Inmates, who have overstayed, complained they were mixing with new arrivals, risking exposure if any of the newcomers were sick.

“New arrivals and those due to be released mix. There is no social distancing during meals. We do not have adequate bathwater,” one of the truckers said.

Meanwhile, there was confusion among government departments yesterday over reports that eight Zimbabwean returnees had escaped from a Beitbridge quarantine centre.

The country has received over 3 000 South African-based locals in recent days that have been sent into quarantine in Beitbridge and other centres in districts of Matabeleland South.

“There are 197 people at Beitbridge quarantine centre as of today, eight absconded and 22 were discharged. Forty-nine are still awaiting their results. Efforts are underway to account for those who absconded,” Information permanent secretary Ndavaningi Mangwanga posted on Twitter.

Mangwana was not reachable for comment, but Chikodzore and provincial police spokesperson Assistant Inspector Philisani Ndebele professed ignorance over the issue.

“I have not received that report; also you have to realise that the centres are not managed by the Ministry of Health alone. There are other stakeholders such as law enforcement as well,” Chikodzore said.

Ndebele said: “As far as we are concerned, we don’t have that report.”