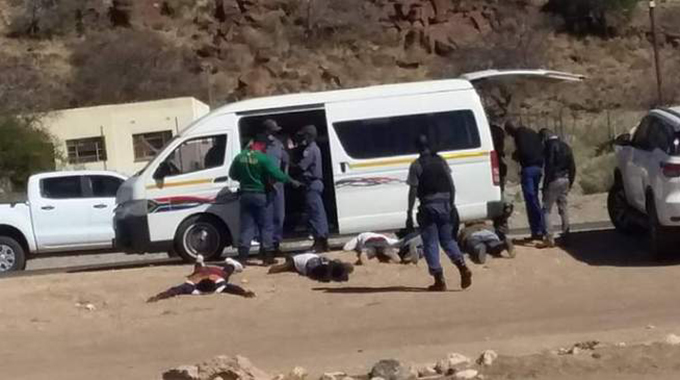 Three men believed to be Zimbabweans were arrested by South African police last Friday as they attempted to rob a post office in Atok, under Apel policing area, in Limpopo Province.

The three suspects were nabbed together with six South Africans.

They are suspected to be part of a syndicate targeting major post offices where most social grants payouts are processed every month end.

The gang has since appeared before the Sekhukhune Magistrate Court where they were remanded in custody to June 11 pending further police investigations.

“The suspects were arrested during a snap operation that was conducted by members of the Tactical Response Team and crime intelligence,” said Brig Mojapelo.

“We received information about a possible armed robbery at a Post Office in Atok under Apel policing area and reacted swiftly, leading to the arrest of the suspects.

“A suspicious vehicle, (a Ford Ranger) with three occupants was spotted along the D4180 road between Atok and Ga-Selepe. Soon after stopping, the driver suddenly got out and allegedly pointed the members with a firearm.”

The suspect was then shot and taken to hospital where he was admitted under police guard, while the firearm was taken.

Another vehicle, a Toyota Quantum with five occupants, was spotted along the D4190 in the Atok area and the driver was ordered to stop, and after the vehicle was searched, a firearm was found hidden inside and all five suspects were apprehended.

SAPS is also pursuing four unknown suspects who stormed into a post office in Seshego Zone 4 and robbed an undisclosed amount of cash. The suspects were allegedly armed with firearms and entered the post office where social grants were being paid out, and demanded money from tellers.

Brig Mojapelo said the gang overpowered the security official on duty and wrestled away his service pistol, robbed the post office of cash and fled from the scene.- Herald